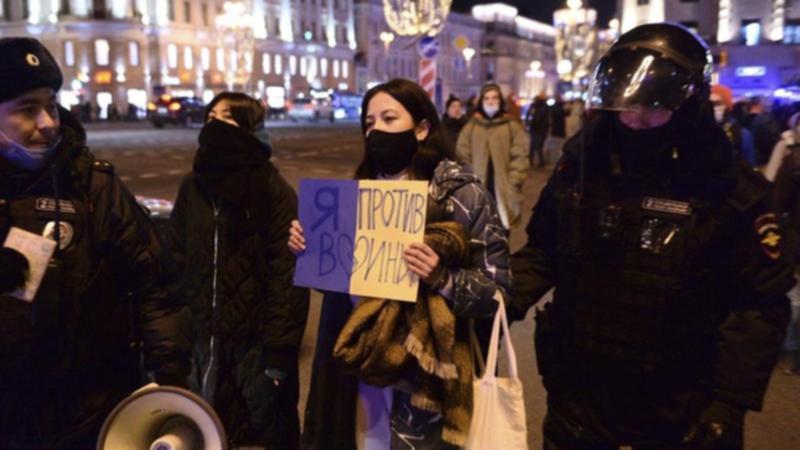 Calls are growing inside Russia for President Vladimir Putin to stop the war against Ukraine.

“We, Russian doctors, nurses, and paramedics, are decidedly against the attacks conducted by Russian troops on Ukrainian territory,” read a petition in Russia that was signed by more than 300 people.

Dozens of Russian humanitarian organisations published an open letter to Putin, asking him to stop the war: “War is a humanitarian catastrophe that leads to pain and suffering… We consider violent solutions to political conflicts inhumane and call upon you to cease fire and begin negotiations.”

More than 2000 people have been arrested since Thursday at demonstrations against the war.

Russian authorities prefer to speak of a “military operation” and have been taking action against the use of the word “war” in the media.

Foreign television channels have been blocked for days in a large residential and office complex in the centre of Moscow, where many diplomats and foreign correspondents live and work alongside Russian officials.

The management of the building has blamed a failure of the satellite systems and has offered to activate Russian state channels instead.

Putin has justified his war on Ukraine by saying that he wanted to disarm the NATO-aspiring country and liberate it from its “neo-Nazi” government.

Volodymyr Zelenskiy also thanked the many prominent Russian artists, intellectuals and those working in the media who have openly spoken out against the war.

Even a member of the Russian Communist Party demanded an end to the war.

He said that it had not been his intention to unleash a war with his vote in parliament to recognise the People’s Republics of Donetsk and Luhansk as independent states.

“I think that the war should be ended at once. When I voted for the recognition of DNR/LNR, I voted for peace and not for war,” Mikhail Matveev said, using the Russian acronyms for the self-declared republics.

His intention had been “that Russia act as a shield, so that the Donbass is not bombed, not that Kyiv be bombed”.

Donbass is the region of eastern Ukraine in which Donetsk and Luhnask are both located.

On social media, many Russians have voiced their dismay at the war in Ukraine.