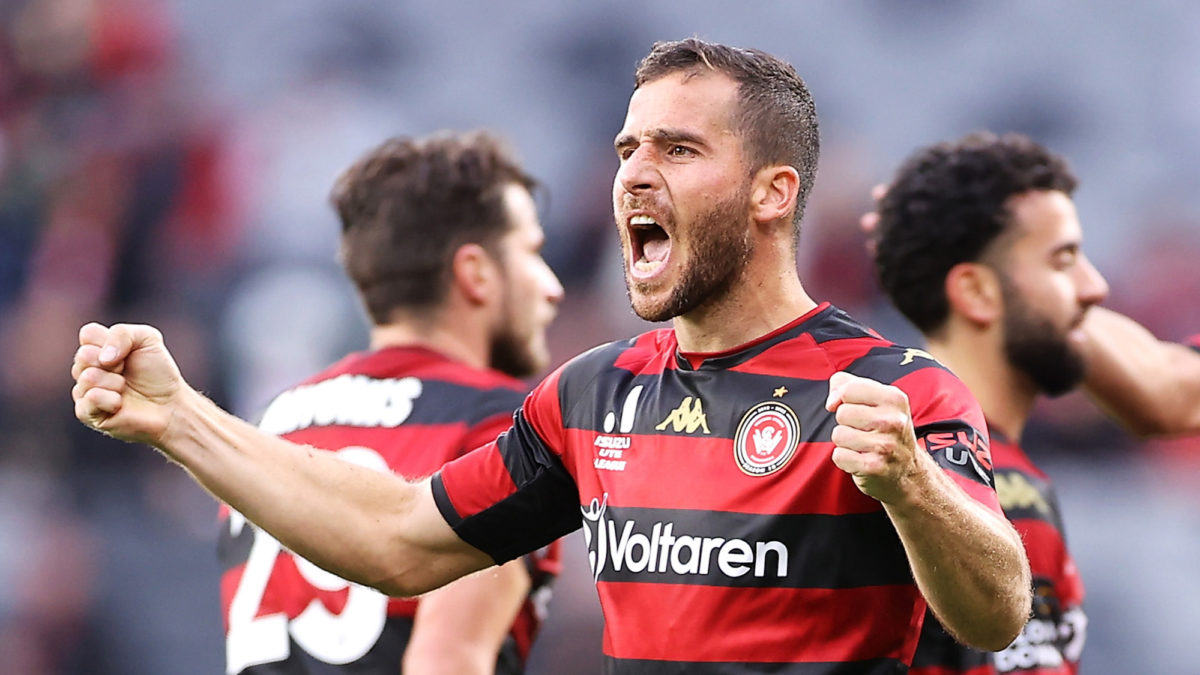 It is a busy Match Week 20 in the A-League Men and particularly for the Victory, Roar, Western United and Melbourne City, with short turn arounds and two games to play within five days.

There are some appealing and juicy fixtures on the card, with tonight’s Melbourne Derby a standout and the Central Coast vs Adelaide on Saturday also looking a potentially exciting affair.

Sunday brings the round to an end when the Wanderers look to take another step towards finals’ contention when they travel to Melbourne to face the Victory.
Texi Smith’s lead continues to shrink as the Tuckerman and Thomas train draws ever nearer to him, Simon Hill and the crowd have some serious catching up to do.

Good luck with your tips for the round and be sure to enter them in the sheet below to have a say as the voice of the people.

Here are the thoughts and selections of the panel leading into a busy week of football.

Both sides are missing key stars for this local derby, with Nick D’Agostino and Ben Folami on Socceroos duty for Victory, while Leo Lacroix, Neil Kilkenny and Alessandro Diamanti are big outs for Western United. Expect them to cancel each other out in what is a tricky fixture for both teams.

Brisbane Roar finally put a complete performance together in their 4-1 thrashing of Perth Glory, but they couldn’t have asked for a tougher test at home to Melbourne City. If they’ve finally figured out how to provide some service to Juan Lescano, they could stun the defending champions in Redcliffe.

The Jets snapped a three-game losing streak with that 4-0 thumping of Wellington Phoenix last time out, and they’ll head into this clash with arch-rivals Sydney FC full of confidence. They’re yet to record back-to-back wins all season however, and the visitors should just about possess enough quality to see them off in the Hunter.

Wellington came crashing back to earth with that 4-0 defeat to the Newcastle Jets, and they’re missing half their team to injury and international duty. Perth Glory sacked Richie Garcia after their latest defeat to Brisbane Roar and they’ll enjoy the new-coach bounce with a win over the seriously depleted Kiwis at Leichhardt Oval.

Brisbane Roar are tough to beat in Redcliffe. They’ll down Melbourne City in midweek and make it back-to-back home wins with another victory over Western United and former Roar head coach, John Aloisi. Macarthur win the games I expect them to lose and lose the games I expect them to win. I can’t figure out if they’re a decent side or not, nor whether Ante Milicic knows what he’s doing in the Bulls dugout. And while I expect the hosts to give this game a red-hot crack, I’m tipping Melbourne City just to be on the safe side.

After a three-game losing streak, the Mariners have now gone three unbeaten, even if they haven’t looked overly convincing during that run. If they lack anything under Nick Montgomery this season, it’s arguably a bit of depth and while Adelaide United have some personnel concerns of their own, they could dig in for a point here.

Tony Popovic versus Mark Rudan, Round II? Rudes got the better of his former Sydney United team-mate in their first encounter at Parramatta and the two sides go into this game in urgent need of three points. The Wanderers need them more, but I suspect this one finishes all square.

There will be something makeshift about both team heading into tonight’s Melbourne Derby, with injury and absence causing concerns.

I’ll stick with United based on their more consistent performances this season.

Yes Brisbane Roar are doing much better of late, yet the might of City will be their toughest opponent of late. This fixture usually throws up something special and I’m tipping a seven goal thriller with red cards and tension. City to win it late. No doubt Sydney have looked far more polished lately, yet the Jets continue to be the most unpredictable team in the league. I am hoping this is one of their ‘on’ weeks and that a decent home crowd cheers them home against the Sky Blues.

Saturday is a crazy day of football. Perth have a new manager in place, Wellington are out of form and this is anyone’s guess. The bounce back factor versus a desperate Phoenix with a host of players missing. Perth by a goal. Brisbane and Western United back up quickly in the other twilight fixture, with the Roar likely to get the win based on the home venue and limited recent travel.

It is also a tough week for City yet I cannot pick Macarthur based on current form. If Patrick Kisnorbo can manage to send out a fit and settled squad for this one, his men should still be too good for the Bulls despite just a two day break between fixtures. I am looking forward to the revitalised Mariners up against the Reds on Saturday night. There will be goals and the home side should be able to grab one more than their opponent in Gosford.
The Western Sydney Wanderers are one of the toughest teams to tip right now, with good results blending with some still stodgy play.

Victory may well be desperate to win this one if they fall to Western United tonight and despite two matches in five days, might just get the points at home on Sunday night.

The capitulation is underway. The three rabid street dogs have smelled blood and are chasing this prize show hound down. Socceroos call-ups will wreak havoc. Who knows what we’ll see this week?

The way Western United folded at Sydney FC on the weekend and the grit and determination shown by Victory to stem the tide late on in the derby, suggests there can only be one winner here. With Socceroos call-ups giving Victory some big shoes to fill, they will fill them with ease. Josh Brillante’s opener from a free kick will be followed up in the second half with a double from sub Francesco Margiotta in a one-sided finish, as United fold uncomfortably again.

An unbelievable performance on the road in Perth has made everyone sit up and take notice of Brisbane Roar. They were outstanding and the sight of Luke Ivanovic carving up the home defence was a joy to see. City were so unfortunate not to take the spoils from the derby and really put Victory to the sword at the end. They will continue that theme in this one, shunning the usual cagey away style to run at the home side from the first whistle, barely missing their Socceroos contingent.

The game will be all over by the break with Stefan Colakovski scoring twice.

With both teams coming into this game on the back of thumping wins, Sydney away at the Jets could yield a hat full of goals. The last time these teams met, Sydney threw away a two-goal lead. They are not in such forgiving mood these days though, although James Donachie was handing out gifts against Western United. If the Jets can get some possession early on to frustrate Luciano Narsingh, they may well snatch something from this one, but with Mustafa Amini in great form and the faltering Adam Le Fondre ready to get back to his impish goal scoring ways, it will be a Sky Blue evening in Newcastle.

Losing their manager this week and losing their talismanic striker to national team duty, bottom team Glory have been anything but triumphant on their return to Perth. What a time for Wellington Phoenix at their latest new home Leichhardt Oval; the result at Newcastle was dreadful, but they have verve and excitement throughout their team and are poised for an assault on the top six. Perth can now unshackle Daniel Stynes to lead the team, and his vision and flair will be a factor today as the visitors push hard for an opening goal. The powerful running of Jaushua Sotirio will unlock their defence though and a solitary goal will do for Phoenix to keep caretaker Ruben Zadkovich’s men bottom.

A fascinating match-up on Saturday night sees out-of-sorts Western United travel to Redcliffe to take on an improving Brisbane Roar. After playing in a mini-league with Melbourne City this week, the nature of the A-League Men dictates that no one has a clue who will win this one. It will be exciting.

The home fans will be key. United can’t lose another on the bounce surely, but Luke Ivanovic will do his best to make that happen. Juan Lescano will bundle in a corner, Rene Krhin will equalise with a worldie as the second half gets underway and Dylan Pierias will sneak in a winner to silence the raucous home crowd.

Macarthur didn’t enjoy their trip to Mudgee last weekend, but they will be fantastic back at the Bull Pen in a Saturday night match-up with powerhouse Melbourne City.

The early season promise has dissipated for the home team, but faced with a quality opponent, their players will lift and eke out an important win. If Daniel De Silva returns and Ulises Davila is again given free rein, this could be the performance of the season from the home side. Tommy Uskok to thump in an opener from a corner and once Jordon Mutch slides in a third goal late, the game will be over as a contest.

A return to Central Coast stadium is just the tonic for the Mariners, seeking to continue their upward momentum against a faltering Adelaide United. A Covid cloud over Craig Goodwin could rob us of one of the top performers, but this will be all about the Mariners tonight. Jason Cummings the X-factor, teaming up with Marco Urena to blow the United defence away in a one-sided first half. Little resistance from the visitors will result in further goals to the rampant home side in a five-goal thumping.

Melbourne Victory complete the weekend with a cracker against the unpredictable Wanderers. Mark Rudan has instilled some sort of solidity to the visitors’ approach to games, but they will be picked apart by Victory in this one. With Ben Folami and Nick D’Agostinio away with the Socceroos, the team will pick itself and Margiotta will continue his run of form with another two-goal display.