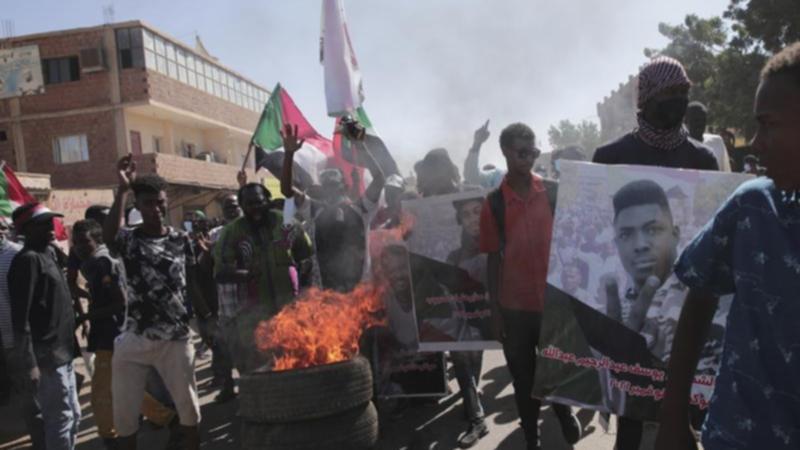 Sudanese security forces have fired tear gas and stun grenades as tens of thousands of protesters opposed to military rule marched through Khartoum and the neighbouring cities of Omdurman and Bahri towards the presidential palace in the capital.

Security forces confronted the protesters about two kilometres from the palace in the centre of the capital on Thursday, a Reuters witness said, adding that there was a heavy security presence in the area.

Protesters also faced tear gas in the city of Bahri near a blocked bridge connecting it to the capital, another Reuters witness said.

Amid a communications blackout, most bridges to Khartoum were closed, with at least two blocked by shipping containers.

An army checkpoint with an armoured vehicle was seen at one of the bridges that remained open.

Protesters heading towards the blocked bridge connecting Bahri to the capital chanted: “As much as we sacrifice and die, we won’t be ruled by the boot.”

Thursday was the 11th round of major demonstrations since an October 25 coup, which saw Abdallah Hamdok removed and then reinstated as prime minister.

The demonstrators have demanded that the military play no role in government during a transition to free elections.

On Saturday, protesters came close to the presidential palace, despite facing heavy tear gas and a communications blackout.

Internet and mobile services appeared to be disrupted in Khartoum on Thursday.

Reuters staff were unable to make or receive domestic and international calls and a source at a telecoms company said an order to shut down internet services had come from the state-owned Sudan National Telecommunications Corporation.

The Central Committee of Sudanese Doctors said more than 200 people were injured during Saturday’s protest, with six wounded by live bullets.

The committee also reported 48 deaths in crackdowns against military rule since October.

“I come for the martyred. I’m not going to be tired because some people gave their lives for this. Being tired is nothing compared to that,” said a nurse in Bahri who has attended all 11 protests and gave her name as Jihad.

“I wear this glove to keep my brothers and sisters and mothers safe. When the police fire tear gas, I can throw it back,” said one young man who asked not to be identified.