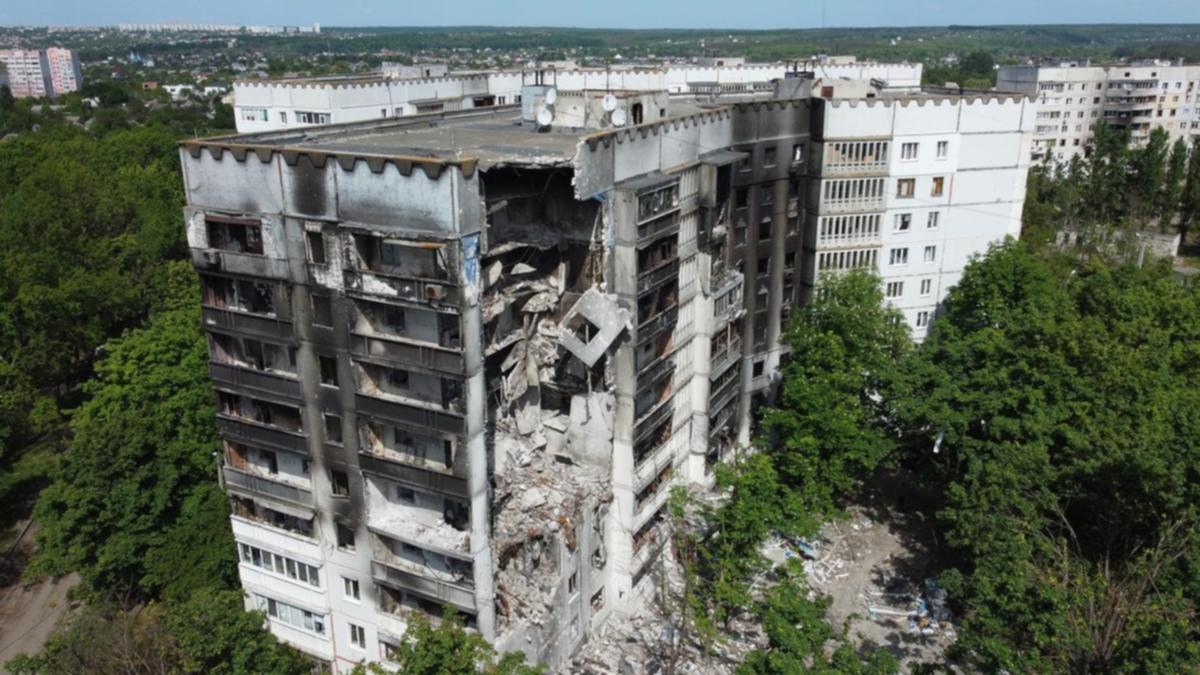 Advancing Russian forces are closer to surrounding Ukrainian troops in the east, briefly seizing positions on the last highway out of a crucial pair of Ukrainian-held cities before being beaten back, a Ukrainian official says.

Three months into its invasion of Ukraine, Russia is trying to consolidate control of the industrial eastern Donbas region, where it has backed a separatist revolt since 2014.

Thousands of troops are attacking from three sides to try to encircle Ukrainian forces in Sievierodonetsk and Lysychansk.

If the two cities straddling the Siverskiy Donets river fall, nearly all of the Donbas province of Luhansk would be under Russian control.

“Russia has the advantage but we are doing everything we can,” said General Oleksiy Gromov, deputy chief of the main operations department of Ukraine’s general staff.

Luhansk governor Serhiy Gaidai said about 50 Russian soldiers had reached the highway and “managed to gain a foothold,” even setting up a checkpoint.

“The checkpoint was broken, they were thrown back… the Russian army does not control the route now but they are shelling it,” he said.

It was possible Ukrainian troops would leave “one settlement, maybe two. We need to win the war, not the battle,” he said.

“It is clear that our boys are slowly retreating to more fortified positions – we need to hold back this horde,” Gaidai added.

Foreign military analysts see the battle for the two cities as a potential turning point in the war, now that Russia has redefined its principal objective as capturing the east.

The town is now firmly under control of pro-Russian fighters, who have occupied the local government building and hung a Soviet hammer and sickle flag at the door.

Drone footage filmed by Reuters of the nearby abandoned battlefield showed craters pockmarking a green field surrounded by wrecked buildings.

Pro-Russian fighters were milling about in trenches.

“Recent Russian gains offer a sobering check on expectations for the near term,” defence analyst Michael Kofman, director of Russian studies at the US-based CNA think-tank, said in a tweet.

Russian troops have broken through Ukrainian lines at Popasna, south of Sievierodonetsk, and are threatening to encircle Ukrainian forces, he wrote.

The head of Ukraine’s armed forces, Valeriy Zaluzhny, called on Telegram for more foreign arms, particularly “weapons that will allow us to hit the enemy at a big distance”.

Russia’s foreign minister, Sergei Lavrov, later warned that any supplies of weapons that could reach Russian territory would be a “a serious step towards unacceptable escalation”.

A few weeks ago, it was Ukrainian forces that were advancing, pushing Russian troops back from the outskirts of Kharkiv towards the Russian border.

But Russia appears to have halted its retreat there, retaining a strip of territory along the frontier and preventing Ukrainian troops from cutting Russian supply lines that run east of the city to the Donbas.

Russian shelling killed at least seven civilians and wounded 17 in Kharkiv, local authorities said, as Russian forces dug in and maintained control of positions in villages to the north.

“It’s loud here but it’s home at least,” said Maryna Karabierova, 38, as another blast could be heard nearby.

She had returned to Kharkiv after fleeing to Poland and Germany earlier in the war.

“It can happen at any time, at night, during the day: this is what life is here.”

Russia did not immediately comment on the situation in Kharkiv.

It has denied targeting civilians in what it calls its “special military operation” in Ukraine.