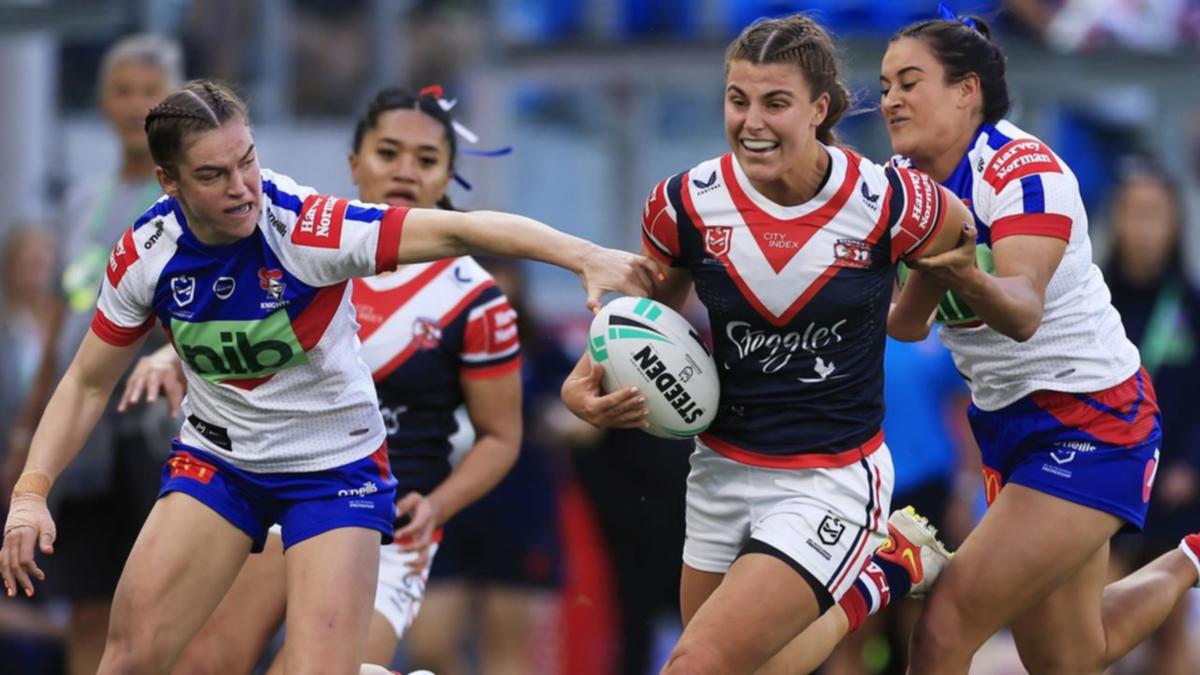 A runaway try to Isabelle Kelly has helped the Sydney Roosters overcome a spirited Newcastle comeback to confirm an 18-16 win that has them closing in on their first NRLW minor premiership.

Leading 10-0 after eight minutes, the Roosters looked set to end the Knights’ unbeaten start to the season in emphatic fashion while keeping their own streak intact.

But Newcastle’s forward pack began rolling forward in the second half and when former Rooster Caitlan Johnston crashed over in the final 10 minutes, the Knights finally had the lead.

Just as time was running out, a wayward Newcastle pass sat up perfectly for Kelly, who raced away on an 80-metre tear that broke the Knights’ hearts.

The Allianz Stadium clash was tipped as a possible grand final preview and began in ideal fashion for the home side.

Jasmin Strange was the beneficiary of a Kelly pass on the left wing and opened the scoring just two minutes into her NRLW debut.

The four-pointer capped off Strange’s recovery from an ACL injury and would have had her father, Roosters NRLW head coach John, applauding from the box.

The Roosters had their second in the set after points when Raecene McGregor broke the line and provided for Kalosipani Hopoate.

A lopsided score looked possible but the Knights hung in the contest as unforced errors began creeping into both sides’ games.

They were rewarded for their patience with the first try after the break, young halfback Jesse Southwell chipping across field for Romy Teitzel.

Star fullback Tamika Upton (calf injury) was a big omission during the week but former Jillaroos fullback Caitlin Moran came in and sent Yasmin Clydsdale over with a pearler of a ball.

When Johnston burst through a hole herself, an upset was brewing.

But Kelly, the inaugural winner of the Women’s Gold Boot Award, showed her class to snatch the lead back for the Roosters with a try that sealed a memorable win as the game clock entered the final five minutes.

The reigning premiers are now a game clear at the top with one round of the regular season to play and will only be usurped if they lose to fifth-placed Gold Coast by a big margin next week and the Knights beat St George Illawarra convincingly.