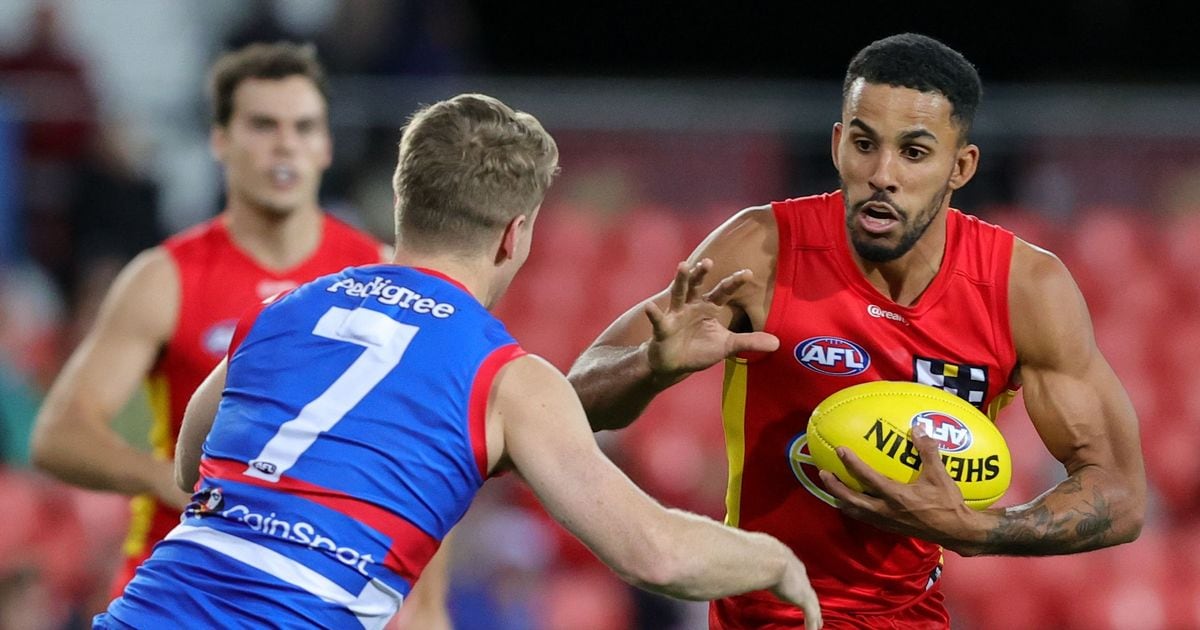 THE CELEBRATION of Touk Miller’s dominance in 2021 was quickly overshadowed in the post-season with the unforeseen mishandling of contested beast Hugh Greenwood, which resulted in losing the elite tackler for… well, nothing.

On the bright side, there is much to celebrate with the return of a fully fit Matt Rowell, quality big man Jarrod Witts and the highly anticipated debut of Elijah Hollands.

Listen to the AFL Fantasy Podcast with The Traders at Apple Podcasts, Spotify and Google Podcasts.

Suns workhorse Touk Miller (MID, $1,024,000) took his game to a whole new level last season, regularly running his opponents into the ground and his scoring reflected that. This was an unconventional seventh-year breakout, previously recording a personal-best average of 101 before blowing it out of water with 122. While many expected his early-season purple patch to drop off, it didn’t with one score under 100 in the last 12 weeks, which included two 140s, a 150 and a 160. He is signed up and passionate about the club… I can’t see the tackling machine dropping off like many predict.

Matt Rowell (MID, $464,000). After bursting onto the scene in his rookie year with two 100s in his first three games, highlighted by a 20-possession, 10-tackle and two-goal performance, his season was obviously cut short. 2021 didn’t start well with an injury in round one keeping him out until round 13. He never reached the heights of his debut year upon return with a top score of just 73 for the season which is well below his potential if fit. One of my first picked.

Elijah Hollands (MID/FWD, $190,000). The highly talented youngster was widely considered a chance to go No.1 in his draft class before suffering an ACL injury, which shows the high regard he is held in. The former Murray Bushranger is confident with ball in hand and very versatile with stoppage work and his ability to hit the scoreboard among the highlights. Had a year in the system now and will be ready to fill the void left by Greenwood. A lock for F6 or M8.

Charlie Constable (MID, $513,000). The pressure was on to bring in a readymade player that can not only have an instant impact, but also be capable of doing it for a few years to come. A tough task, that’s for sure. But as I said earlier, the Sun will rise again and I think the selection of Constable assists that happening sooner rather than later. Starved of opportunity at the Cats despite his ability to dominate at the lower level, there is every chance Constable could average north of the 83 he averaged from his seven games in 2019 which included 106 and 107.

Jack Lukosius (DEF/MID, $721,000). We all know his ability to rack up and take marks down back but he also showed the versatility to push up the ground throughout the year and his scoring spiked as a result. From round 10, he took his game to another level, scoring five 100s between then and the end of the year while averaging 89 in that time. Well worth bumping up the defender rankings.

Ben King (FWD, $429,000). If you are cranking up the value of goals, the big fella has certainly shown an ability to kick it through the big sticks. He made big strides last year, kicking 47 goals for the year including four bags of four and one of five.

Brayden Fiorini (MID, $857,000). Look, I love this bloke as much as anyone, I’m just flagging that his selection in all formats comes with risk. After looking like a lock for the best 22 last year, he managed just one game in the first 13 rounds before getting a good run at it between rounds 16 and 23 where he dropped under triple figures on just one occasion and averaged 110 in that time. Will make or break your Draft season.