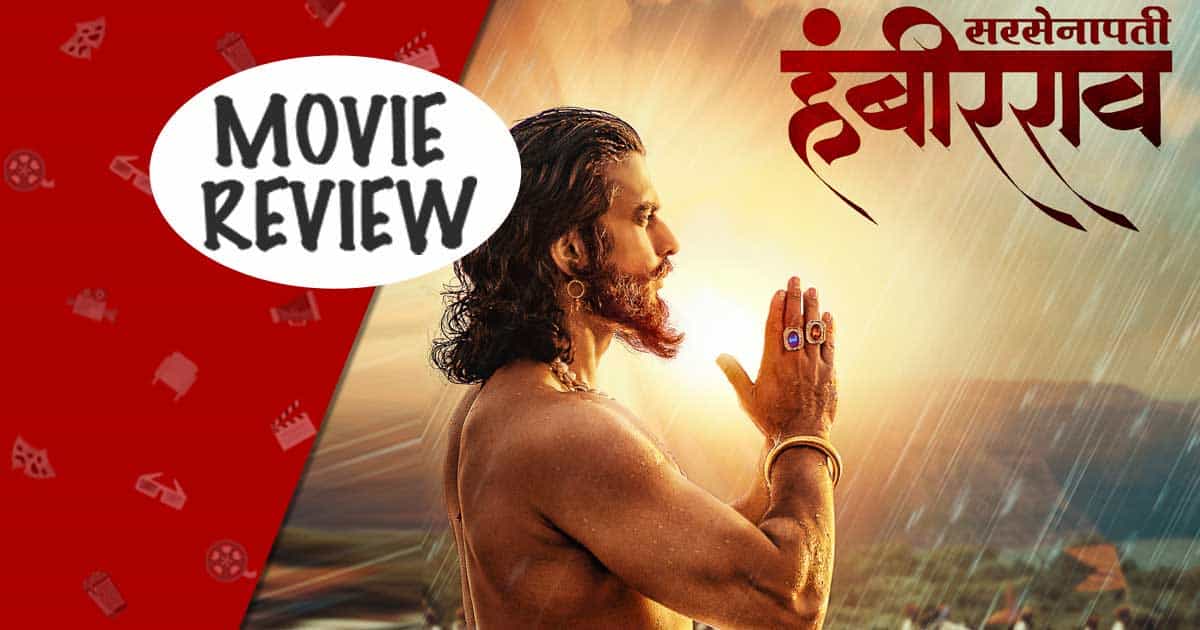 What’s Bad: The length isn’t that long but the film at points, makes you feel so

Loo Break: Other than the interval, there are some scenes where you won’t mind skipping them for a loo

Watch or Not?: It deserves support so that more such big Marathi films come in future. Do watch it!

The film is set during the mid to late 17th century. We are introduced to the cold-blooded Mughal emperor Aurangzeb (Mohan Joshi), who is about to reward Sarja Khan (Raqesh Bapat) for killing the Maratha empire’s military commander. Then the film runs in a flashback and we are introduced to an unsung hero, Hansaji Mohite, also popularly known as Sarsenapati Hambirrao (Pravin Tarde) as per the name given to him by Chhatrapati Shivaji Maharaj.

Right after taking over as military commander, Hambirrao successfully leads the campaign of looting the Bahadurgad (Pedgaon fort) with his unusual yet effective methods. After the passing away of Shivaji Maharaj (Gashmeer Mahajani), he continues his position under Sambhaji Maharaj and dies a death of a warrior who stays loyal to his swarajya and king till the last breath.

The film unveils many lesser-known chapters from the life of Hambirrao, which exhibit his fearlessness.

Fresh from Dharmaveer, I had high expectations from Pravin Tarde for this one and that’s where I was slightly pushed back. Be it Dharmaveer or his Mulshi Pattern, Tarde had a watertight script in his hand, which was on point. Here, our beloved man starts off well but loses tracks at several points. At points, it becomes more of a film based on Chhatrapati Shivaji Maharaj with Hambirrao becoming just a supporting character. It feels like much more of Hambirrao could have been shown.

In Ajay Devgn’s Tanhaji, the titular character was given full space. Even if we talk about the Marathi blockbuster Pawankhind, other characters were given more importance, so it looked like a film based on one particular chapter from Maratha history. Here, the focus gets lost in bits and pieces, and then again the main character of Hambirrao takes over.

If we neglect weak points, the film presents events like the loot of Bahadurgad and a conflict between Marathas and Portuguese in an engaging cinematic manner.

Pravin Tarde nails the character of Hansaji Mohite aka Hambirrao. Tarde looks effortless as his real-life persona very well suits the character’s demand, bringing out that adorable rawness. Separate marks for his amazing body transformation and dedication for giving it all to a physically demanding role.

While Tarde is the titular character, the man who impressed me the most is Gashmeer Mahajani. He plays both Chhatrapati Shivaji Maharaj and Sambhaji Maharaj. As Shivaji Maharaj, Gashmeer carries traits of calmness and intrigue perfectly, and his sudden change as aggressive Sambhaji Maharaj is applaudable. His screen presence alone holds your attention.

Veteran Mohan Joshi fits Aurangzeb’s character perfectly like it’s tailor-made as his aura makes it look more powerful. Raqesh Bapat gets nothing to add as Sarja Khan and does just an okay job.

Others including Shruti Marathe, Upendra Limaye and Devendra Gaikwad are good in their parts.

It felt like in order to give more attention to acting, Pravin Tarde missed that golden touch as director by an inch. The film is the most expensive one in the Marathi film industry and its scenes justify it. However, unlike previous films of Tarde, this isn’t fully engaging and could have been shortened in length. Battle scenes are visually appealing with a lot of bloodshed but lack that punch of adrenaline rush. Yes, in emotions, this man is bang on once again. So, it’s a mixed bag here for Tarde.

Thankfully, the background score stays with the narrative and avoids glorifying unnecessary moments with its loudness. Songs aren’t memorable but go well with the film.

Special mention to cinematographer Mahesh Limaye for bringing the best out of each scene. His frames justify the scale of the film and there are many takeaways as visual treats, especially the scene featuring Gashmeer and Tarde with the sun rising in the background.

It’s not as tighter as Pravin Tarde’s previous work but still makes up for a good one time watch for its visually appealing shots, performances, and sincerity in taking the Marathi industry to the next level in production value.

Sarsenapati Hambirrao releases on 27 May, 2022.

Share with us your experience of watching Sarsenapati Hambirrao.

Must Read: Kartik Aaryan’s Fees For Bhool Bhulaiyaa 2 Is Almost Half Of The Budget Of Its Prequel Led By Akshay Kumar – (Fact-O-Meter)