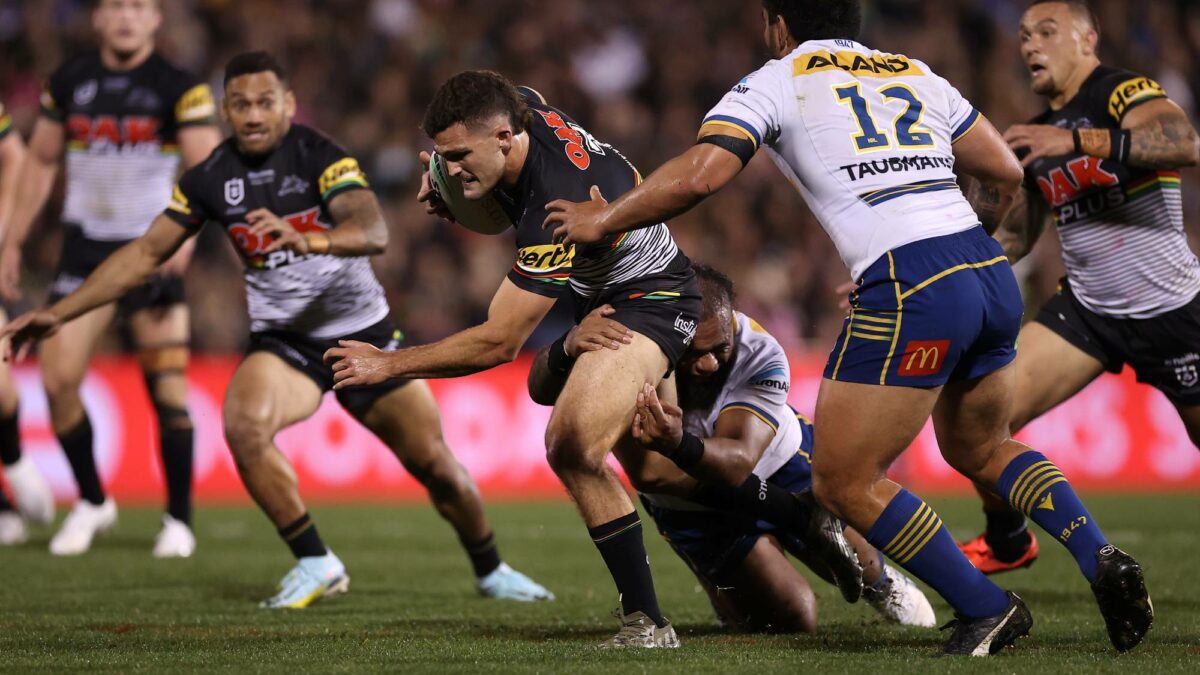 Upsets in week one of the NRL finals have caused turmoil with Cronulla missing their chance of directly qualifying for the preliminary final and the Storm and Roosters the first teams eliminated.

Penrith, after thumping Parramatta 27-8, and North Queensland, by virtue of their 32-30 extra-time epic over the Sharks will skip week two and await their opponents for the Preliminary Final.

Parramatta host Canberra at CommBank Stadium on Friday in their Semi-Final at 7.50pm with the Sharks vs Rabbitohs clash to be played on Saturday at Allianz Stadium at 8pm.

North Queensland will play the winner of next week’s Eels vs Raiders clash while the Panthers will face the winner of Cronulla’s semi-final against the Rabbitohs after their Elimination Final triumph over the Roosters on Sunday afternoon.

Tickets for Preliminary Finals will be on sale from next Monday (September 19).

Taylan May will miss Penrith’s NRL preliminary final after pleading guilty to a careless high tackle charge following the Panthers’ 27-8 defeat of Parramatta.

The winger was sin-binned for his hit on Eels centre Will Penisini during the first half of Friday night’s game and was handed a category two charge.

May risked missing both the preliminary and grand final by unsuccessfully pleading his case at the judiciary and has accepted a one-match ban.

Charlie Staines and Sunia Turuva are the two most likely replacements for May.

May’s availability for the finals series had been the subject of debate after the NRL suspended him for two weeks following the guilty verdict in an assault trial but delayed the suspension until 2023.

Cronulla co-captain Dale Finucane was charged with a grade one crusher tackle in the aftermath of the Sharks’ qualifying final loss to North Queensland.

Finucane can escape suspension with a $3000 fine for his hit on Luciano Leilua if he accepts an early guilty plea but will miss two games should he make an unsuccessful challenge to the charge.

Canberra prop Joe Tapine and Cowboys winger Kyle Feldt have escaped scrutiny from the match review committee despite being placed on report for a high tackle and a crusher tackle respectively on Saturday.

In the first half, prop Burgess and winger Milne were given 10-minute spells in the sin bin for high tackles that came within a minute of each other.

Burgess was sin-binned after committing two high shots in the space of 30 seconds, the first leaving Roosters captain James Tedesco with a game-ending concussion. The second hit on Matthew Lodge left referee Ashley Klein with little option but to give Burgess a spell.

Milne wore a punch from Victory Radley that left the Roosters lock sin-binned but was ordered from the field himself after hitting Joseph Suaalii high.

At the hour-mark, Tatola became the fifth player of the night to spend time in the sin bin when he slammed Egan Butcher’s head into the ground, sparking a melee.

A high shot on Connor Watson resulted in Milne spending another 10 minutes in the bin, only four minutes after Tatola left the field.

While they have depth in the outside backs to cover Milne, the Rabbitohs can ill-afford to lose Burgess or Tatola for next week’s sudden-death semi-final against the Sharks, who finished the season second on the ladder.

How the finals work

The eight teams are divided into two groups of four, the top four (1-4) and the bottom four (5-8), who play games among themselves in the first week of finals.

In the top four, first play fourth and second play third in qualifying finals. The higher-placed teams, first and second, have the right to host these finals in their home state.

One of the advantages given to teams in the top four is that they cannot be eliminated if they lose in the first week.

However, the winners of these finals have a bye in the second week and host a preliminary final in their home state in the third week.

Meanwhile, the losers of these finals must play again in the second week and, if they survive that, may have to travel interstate to play their opponent in the third week. So winning a qualifying final is a significant advantage.

In the bottom four, fifth play eighth and sixth play seventh in elimination finals. Again, the higher-placed teams, fifth and sixth, have the right to host these finals in their home state.

As the name suggests, the loser of these finals will be eliminated from the finals series. The winners go on to play the losers of the qualifying finals in semi-finals in the second week.

The teams that won the qualifying finals have a week off, while the teams that lost the elimination finals are out of the running.

The teams that lose these semi-finals will also be eliminated, while the teams that win will go through to face the qualifying final winners in preliminary finals in week three.

The losing qualifying final teams are given the right to host these matches in their home state. These games are played across two time-slots: Friday night and Saturday night.

There are a wide variety of potential preliminary final combinations available depending on how the first two weeks of the finals series pan out.

The qualifying final winners not only have had a week off as a bye, but also get to host these games in their home state, giving them a significant advantage. These games are played across two time-slots: Friday night and Saturday night.

In the fourth week of finals, the two teams that won the preliminary finals play each other in the grand final. The winner of this match is declared the year’s premiership team.

The grand final could theoretically be between any two teams in the finals series, except for those that play elimination finals against each other in the first week and cannot possibly both progress.

Although one team will be listed first as the ‘home’ team, this fixture does not change venue regardless of the home state of the teams involved.

It has been played every year at ANZ Stadium since it was constructed in 1999, but is being played in Brisbane in 2021. It is currently played on a Sunday evening time-slot.