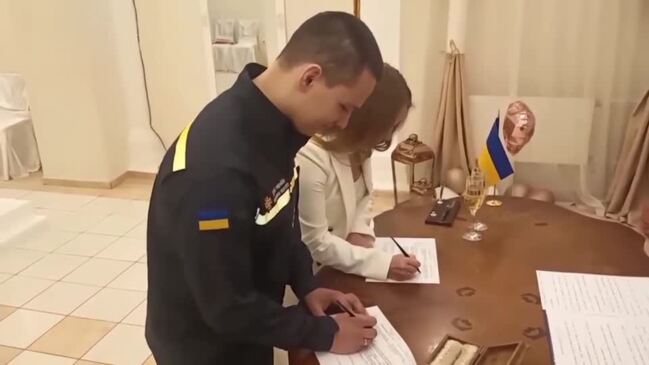 Four members of Ukraine’s emergency service married their partners responders in Kyiv as fighting continued to rage in the Ukrainian capital Wednesday, March 23, officials said. Footage posted on Facebook by the Kyiv branch of Ukraine’s State Emergency Service (SES) showed four SES members marrying their partners in civil ceremonies where guests presented flowers and took photographs with the smiling couples. In the post, officials named the responders as Sergey Tkachenko, Valery Bozhenko, Alexander Kravchuk, and Alexey Bilous, and congratulated the newlyweds on their new lives together. “The most important thing you can wish for today is a peaceful sky above your head. For each of us, the future is different, but almost all of us can associate with love,” the post read, according to a translation from Facebook. “Life goes on, despite the many disturbing challenges this morning related to enemy shelling of residential neighborhoods of the capital,” the post read. Footage released by the SES earlier on Wednesday showed emergency services extinguishing fires in the Shevchenkivsky district of the capital. Several private homes, as well as a 16-story residential building, were destroyed and four were injured, Kyiv officials said. Credit: SES Kyiv via Storyful