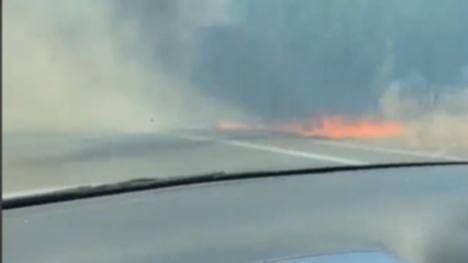 A video filmed during Wednesday’s bushfire emergency in High Wycombe has captured the terrifying moment a car drove through the fire zone.

The footage shows the car travelling down Roe Highway towards big plumes of smoke, before slowing down to let another car pull in front.

The car then travels through the fire zone — as flames lick the side of the road and plumes of smoke fill the air.

“They’re letting us go through,” one person can be heard saying, before telling the driver to “go, go, go”

“You can feel the heat,” they exclaimed.

The blaze, which threatened lives and homes, has now been contained and the warning has been downgraded to “all clear”.

While roads are no longer closed, motorists are being asked to take care and avoid the area if possible.