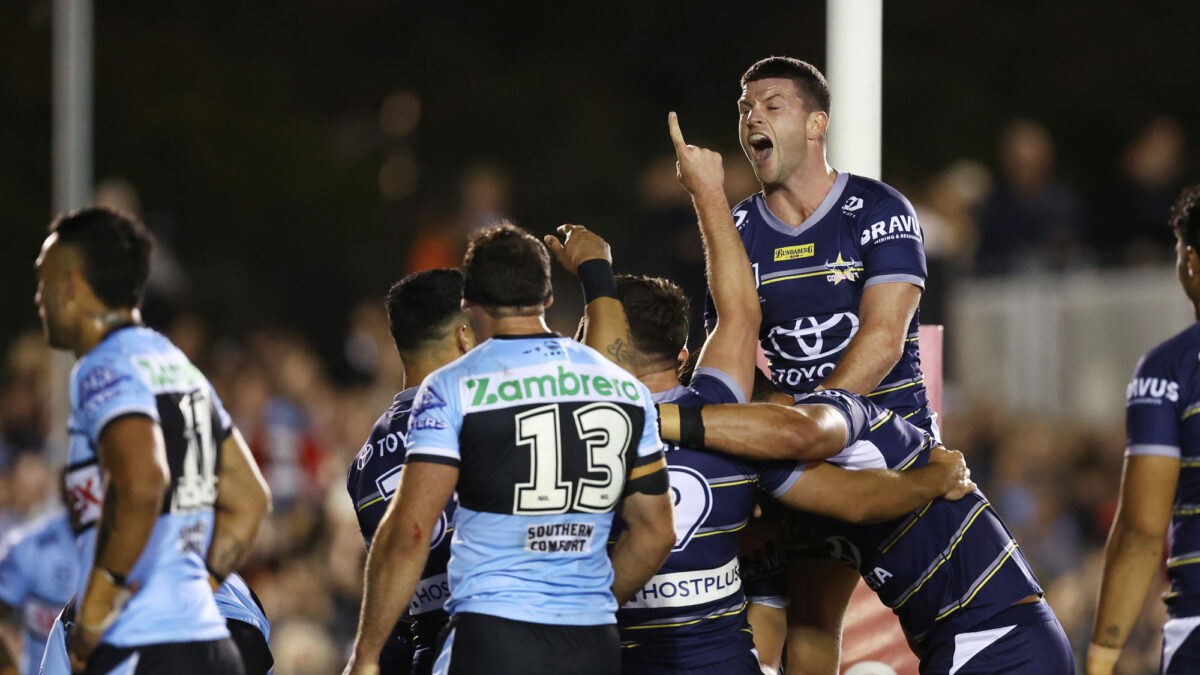 The North Queensland Cowboys have broken the hearts of a sold-out Shark Park, beating Cronulla 32-30 in an epic finals match on Saturday night that went through extra time and then into golden point.

The 93-minute battle was one of the most entertaining and heart-pounding matches that saw each player use every ounce of petrol in the tank. The side that many favoured for the wooden spoon are now one game away from playing in the grand final.

With the sides still even after ten minutes of extra time, the deadlock was finally broken when Val Holmes booted a 45m field goal against his former club to send the Cowboys straight to the preliminary finals.

“I’ve seen Val do that a few times,” said coach Todd Payten. “I saw him miss three in the warm up! But I’ve also seen him practice his goalkicking when there’s nobody around.

“He loves the big moments and the big crowds, which is what you need from your best players. He really stood up and made it count.”

The Sharks will now face the winner of Sunday’s elimination final between the Sydney Roosters and the South Sydney Rabbitohs, while the Cowboys get to put their feet up for a week before taking on the winner of Parramatta v Canberra.

It was a fast and physical encounter. Many though it was always poised to be an exciting attacking match, but the brutality and tough contact was just as impressive.

“It’s a mixture of pride and disappointment and excitement still. We get another crack,” said Sharks coach Craig Fitzgibbon.

“The boys are good, they’ve come in. They’re disappointed but they know we still have another shot, so we have to dust ourselves off and walk out to get prepared for next week.

“It’s a bit more open, probably, but I thought it was more physical than the scoreline suggested. It was a good battle, wasn’t it. It was just two sets that cost us in the first half, other than that I thought we defended alright.

“We hung in there for long periods but two sets weren’t good enough.”

One would never have known Tom Dearden had surgery for a ruptured testicle only a short time ago, with young five-eighth instrumental in his side’s victory, but he one of many Cowboys who stood up to the occasion.

Jason Taumalolo was at his wrecking ball best and fellow forwards Coen Hess, Reuben Cotter and Tom Gilbert were destructive up the middle.

Reece Robson was electric out of dummy-half, and backs Scott Drinkwater, Peta Hiku and Holmes all played their roles perfectly.

“Peta Hiku had 28 carries, Rubes (Cotter) had 62 tackles, Jase (Taumalolo) played a long time. Robbo (Reece Robson) didn’t come off and made a bucketload of tackles as well,” said Payten.

“I’m really proud of the performance we were able to get in under duress, and we played some pretty decent footy when it really mattered too.”

The Cowboys found themselves in great territory early on after Royce Hunt was penalised for holding down Townsend. Tom Gilbert opened the scoring shortly after when he borrowed his way over the try line to score for the visitors.

Only a moment later, the Sharks returned serve when they quickly found themselves up the other end and earned two set restarts. Forward Toby Rudolf charged into the Cowboys’ defence and pushed his way through to score.

The Cowboys were on the attack again after Ronaldo Mulitalo was taken over the sideline with the ball. The advantage was over before it begun after Jordan McLean dropped the ball on the second tackle.

Mulitalo was back in the spotlight soon after, on the receiving end of a crusher tackle from Kyle Feldt. The Sharks were awarded a penalty but were also unable to capitalise after Dale Finucane dropped the ball on their first tackle.

When Blayke Brailey earnt his side another set restart close to the Cowboys line, it wasn’t long before the Sharks took the lead, with Nicho Hynes putting Siosifa Talakai into space to score the Sharks’ second try of the night.

The Cowboys threw straight back, as Dearden made a break from dummy half to run 50m through some very soft Sharks defence to level the scores once more.

The visitors went back-to-back within a manner of minutes: a beautiful long pass from Taumalolo found Peta Hiku who pushed off defenders, raced around Talakai and got his team back out in front.

The see-saw magic continued when the Sharks leveled the scores once more. Mulitalo made a break up the sideline and offloaded to Will Kennedy who scored in his first game back since ankle surgery. The teams went to the sheds tied up at 18-18.

The second half began as a grind, with both sides playing set for set. It took until the 54th minute for the deadlock to be broken when the Cowboys spread it right to left finding winger Murray Taulagi who acrobatically crossed in the corner.

The back-and-forth match got back into its rhythm after a dropped ball from Robson off the back of an Andrew Fifita tackle saw the Sharks with the ball on the 40m line. Moments later Cameron McInnes stormed over to give his side the lead.

The Sharks thought they went back-to-back after Tracey scored in the corner, but the bunker denied the try after Jesse Ramien was ruled to have obstructed Val Holmes in the defensive line.

But it wasn’t long before the Sharks got the green light, when Hynes found Kennedy close to the try line to slam the ball down over the line for his second.

The home side lifted the intensity after that, seemingly finding another gear. The defensive pressure from the Sharks forced another Cowboys error in their own half, giving them great field position once more. Finucane was close to scoring before Taumalolo made a try-saving try on the line and made Finucane lose the ball.

A penalty gave the visitors some breathing space, getting them back up into the Sharks’ half. When Tracey was sent to the sin bin for a professional foul on Holmes with seven minutes on the clock, the penalty goal brought the points differential back to six.

The Sharks’ defence was put under pressure with a man down, but they kept hanging on with everything North Queensland threw at them. A successful captain’s challenge after a Matt Moylan play-the-ball interference got the Cowboys within striking distance.

A powerful Taumalolo stormed over to score right on the full-time siren, with the Holmes conversion forcing the game into extra time. The grind set back in for the ten minutes of regulation overtime, before the centre stood up to win the tie from beyond the 40.