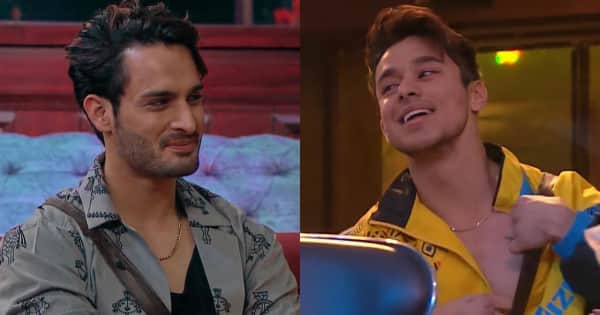 Today, after Bigg Boss schooled the housemates, everyone got into a discussion. Devoleena created a huge scene after she learned that Abhijit betrayed her and had allied with Karan, Teja, Umar and Rashami in cancelling the task. Pratik spoke to Umar and thanked him for playing the task for him. Umar went on to say that he doesn’t have to repay him back that he had initially planned to help Shamita. Nishant, Shamita also thanked Umar for helping Pratik This selfless attitude of Umar Riaz is winning hearts. Also Read – Salman Khan drives autorickshaw, netizens say, ‘God bless the people on the road’

Even in tonight’s task for the eliminations, Umar was seen being cautious and getting into argument with the contestants as they distracted the one sitting inside the box. Umar’s genuine concern for everyone during the tasks is winning hearts every day. SHOW STOPPER UMAR RIAZ is trending on Twitter as your read this. Check it out here: Also Read – Exclusive: Sunny Leone talks about her controversial song Madhuban, working with Salman Khan, Bigg Boss and more [Watch Video]

Whoever Came to the show and Played against him, Bad mouthed him, Made fun of his profession end up loving him After Evicted, Everyone inside BB house or Outside love our Champ #UmarRiaz
We watch BB only for him, The Reason we watch tis season
SHOW STOPPER UMAR RIAZ

Makers sent the wild cards to break #Umran and to break Umar, but they ended up liking him.#UmarRiaz
SHOW STOPPER UMAR RIAZ

Umar is such a pure soul, he said Pratik I played for you doesn’t mean you need to return the favour in the future, Nishant said Umar why are u so sweet, and Umar smiled, and Gosh how hot he looked #UmarRiaz #BiggBoss #BiggBoss15

He is in good terms with all and respect every housemate, this is the reason he is getting loved inside #BB15 by housemates and outside by #UmarArmy #UmarRiaz

He is king of Hearts ?

Episode highlights for me..

Umar and Pratik haven’t been friends per se. They have had their disagreements and clashes. However, when he saw that nobody was going to support Pratik, Umar jumped in to play for him.