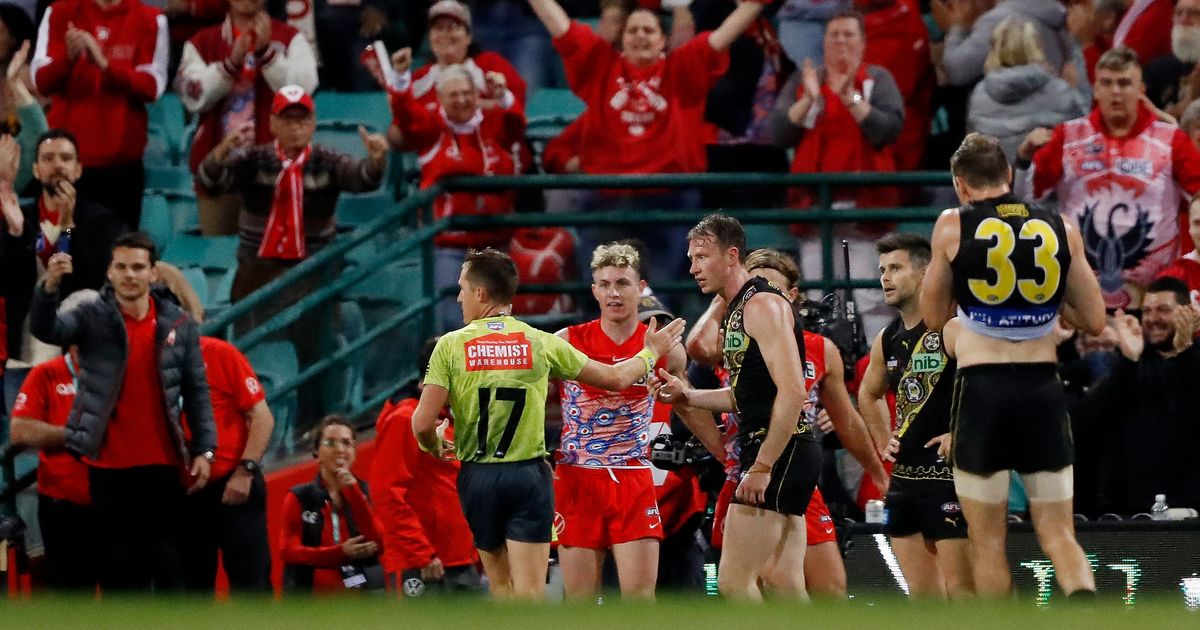 RICHMOND coach Damien Hardwick said coughing up a five-goal lead was of greater concern than the decision to not pay Dion Prestia a 50m penalty after the siren.

Prestia would have had the opportunity to tie the game, but the umpires’ collective call was Chad Warner had not heard the whistle for a free kick when he booted the ball into the crowd on the final siren in Sydney’s six-point win.

Hardwick said he wasn’t sure how the decision should have been adjudicated.

“It’s irrelevant. You can look at that last incident, but the fact of the matter is we were up by 30 (33) points, it’s easy to look at the last game, but we should have iced the game,” Hardwick said.

“Seventy-five per cent of the time I thought we were pretty good, 25 per cent lapse – especially in the third quarter – there were some things we thought we could have done a bit better.

“Everyone will always look at the last play and the what-ifs, but the fact of the matter is, if you’re 33 points up, you shouldn’t lose.”

“Last quarter, we rectified it and had our chances, and we kicked 2.6 or something like that (3.6) to their six straight. There’s the game.

“It would be remiss of me to say we’ll give up five free-kick goals again, two from 50m penalties and a few downfield. We just kill ourselves at various stages and we expect better. It’s disappointing to lose a game like this through ill-discipline.”

Sydney coach John Longmire said his side’s stunning turnaround came on the back of tidying up the basics.

“We started winning some of those contests. Sometimes it can be all different things you look at, and we just didn’t half or win enough of those contests compared to Richmond in the first half, and there were some moments we had to be a bit better and break even,” Longmire said.

“We gave away free kicks off the ball and things we need to get better at, and fortunately the players got that sorted at half time and we were very good in the second half.”

Lance Franklin was the star of the show, booting five and taking home the Goodes-O’Loughlin Medal for best afield, but was also involved in a tussle with Trent Cotchin.

“He did some pretty special things. At big moments, he was able to put his hand up and do some things that only very few players can do,” Longmire said.

“He was 1v2 and a couple of times he was able to break even those contests and he was able to hit the scoreboard with accurate kicking, he played well.

“Just disappointed it was a free kick away, it was the second one we’d done. We’d had a couple of chances to go forward and have a shot at goal, twice, and that was our second one, so that was what I was disappointed about.”