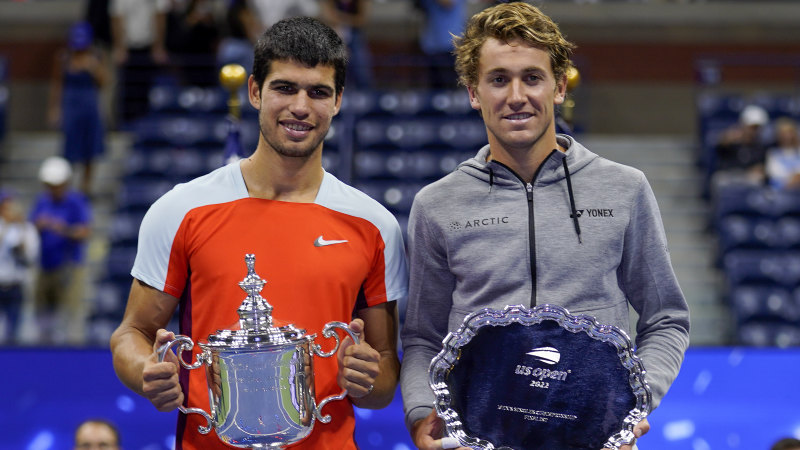 This was not a stroll to the finish, though.

Alcaraz dropped the second set and faced a pair of set points while down 6-5 in the third. But he erased each of those point-from-the-set opportunities for Ruud with the sorts of quick-reflex, soft-hand volleys he repeatedly displayed.

And with help from a series of shanked shots by a tight-looking Ruud in the ensuing tiebreaker, Alcaraz surged to the end of that set.

One break in the fourth was all it took for Alcaraz to seal the victory in the only grand slam final between two players seeking both a first major championship and the top spot in the ATP’s computerised rankings, which date to 1973.

He is a 23-year-old from Norway who is now 0-2 in slam finals. He was the runner-up to Rafael Nadal at the French Open in June.

Ruud stood way back near the wall to return serve, but also during the course of points, much more so than Alcaraz, who attacked when he could.

Alcaraz went after Ruud’s weaker side, the backhand, and found success that way, especially while serving.

If nothing else, Ruud gets the sportsmanship award for conceding a point he knew he didn’t deserve. It came while he was trailing 4-3 in the first set; he raced forward to a short ball that bounced twice before Ruud’s racket touched it.

Play continued, and Alcaraz hesitated then flubbed his response. But Ruud told the chair umpire what had happened, giving the point to Alcaraz, who gave his foe a thumbs-up and applauded right along with the spectators to acknowledge the move.

Alcaraz certainly seems to be a rare talent, possessing an enviable all-court game, a blend of groundstroke power with a willingness to push forward and close points with his volleying ability. He won 34 of 45 points when he went to the net Sunday (Monday AEST).

Make no mistake: Ruud is no slouch, either. There’s a reason he is the youngest man since Nadal to get to two major finals in one season and managed to win a 55-shot point, the longest of the tournament, in the semi-finals Friday.

But this was Alcaraz’s time to shine.

When one last service winner glanced off Ruud’s frame, Alcaraz dropped to his back on the court, then rolled over onto his stomach, covering his face with his hands.

Then he went into the stands for hugs with his coach Juan Carlos Ferrero, a former No. 1 himself who won the French Open in 2003 and reached the final of that year’s US Open, and others, crying all the while.

You only get to No. 1 for the first time once. You only win a first grand slam title once. Many folks expect Alcaraz to be celebrating these sorts of feats for years to come.