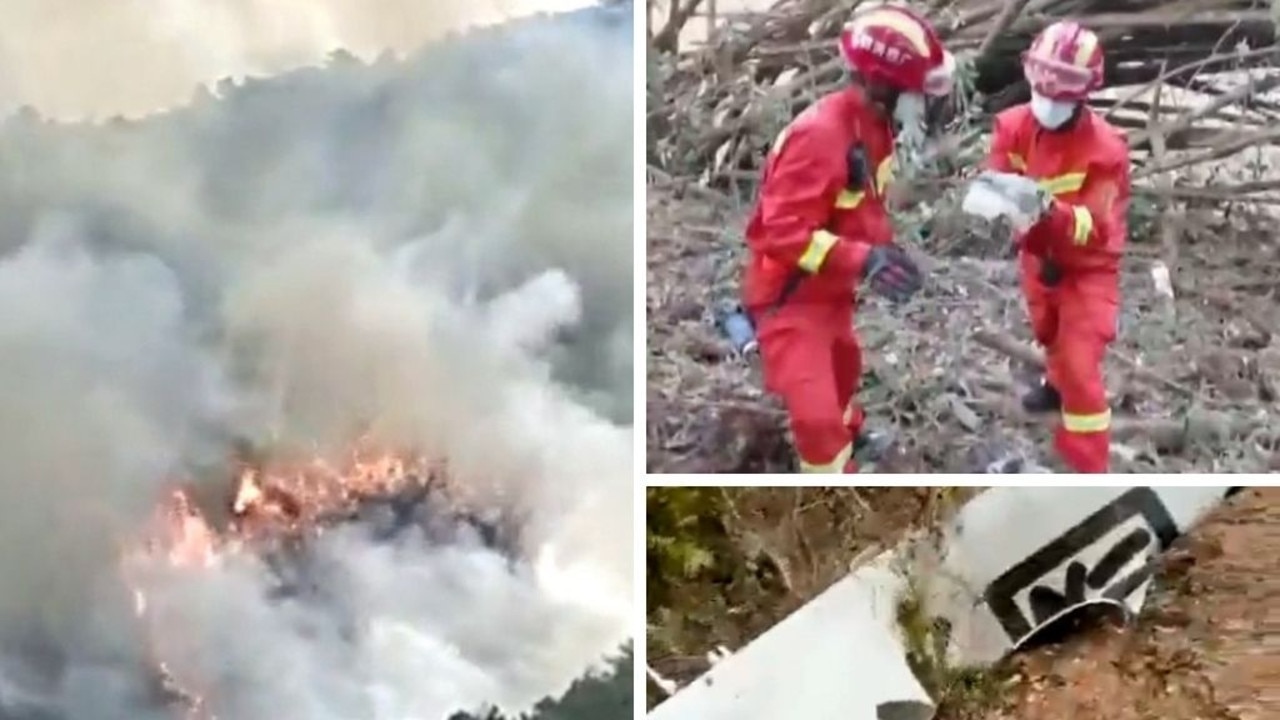 A Chinese rescue worker has speculated all 132 passengers of the doomed China Eastern jet were “totally incinerated” in the crash.

A rescue worker has speculated all 132 passengers of the ill fated China Eastern jet were “totally incinerated” when the plane plunged into a mountainside and burst into flames.

Chinese aviation authorities said Tuesday no survivors had so far been found following the crash, that saw the jet drop 20,000 feet (6,096 metres) in just over a minute before slamming into rugged terrain in southern China Monday afternoon.

“Up to now, search and rescue work has not found any survivors,” Zhu Tao, director of the aviation safety office at China’s aviation authority told reporters in the first official comments on the likelihood all of the passengers dying in the air disaster.

Chinese recovery teams on Tuesday picked through the debris of a crashed jet after it inexplicably plummeted.

One of the rescue workers on Tuesday told AFP scorch marks were visible from the crash and resulting fire, with one saying it appeared passengers had been “totally incinerated” from the intensity of the blaze.

Hopes of finding any survivors had all but vanished a day after the Boeing 737-800 passenger jet nosedived into the mountain — likely making it China’s deadliest air crash in nearly three decades.

Questions have since mounted over the cause of the crash, with Australian aviation expert Neil Hansford telling news.com.au the crash was unlikely to have been caused by a technical issue.

“Likely scenarios include pilot suicide, aircraft mid-air collision with military aircraft (they don’t have transponders like civil aircraft), [flight MU5735] was struck by a missile or an on-board explosion,” Mr Hansford said.

The plane’s near-vertical nosedive drop from the sky would have rendered the passengers and crew unconscious, according to aviation experts.

The 10 to 20-second spell during the rapid descent could have been “where one or more of the pilots regained consciousness and tried to save the plane” flight commentator Sally Gethin told The Sun.

The airline had earlier acknowledged that some aboard the jet, which was travelling from the city of Kunming to the southern hub of Guangzhou, had died, but there has been no official confirmation of the number of dead.

President Xi Jinping quickly called for a full probe following the crash as search teams armed with drones descended upon the site in a forested, rural area of Guangxi province.

A villager near the sprawling crash site, giving only his surname Ou, recounted hearing a “sound like thunder” followed by a blaze that blistered the surrounding hills.

A torn wallet and a burned camera lens were among the eviscerated possessions captured on video by a reporter from the state-run People’s Daily who was able to enter the crash site.

But AFP journalists were blocked at a hillside checkpoint by a group of men identifying themselves as Communist Party members who said they had “orders from above” to prevent access.

The disaster occurred after a high-speed vertical nosedive, according to a video carried by Chinese media. AFP could not immediately verify the video’s authenticity.

Flight MU5735, which took off from Kunming shortly after 1pm (4pm AEDT), lost contact over Wuzhou, a city in the Guangxi region, according to China’s aviation authority.

The foreign ministry said Tuesday they believed all passengers on board were Chinese nationals.

In Guangzhou airport, staff assisted loved ones of the 123 passengers and nine crew members aboard the plane, which stopped sending any flight information after dropping a total of 26,000 feet in altitude in just three minutes.

Relatives and friends of those on-board endured a grim wait for news. A user on Weibo, China’s Twitter-like platform, wrote that he was a friend of a crew member on the crashed plane.

“I will miss you forever,” he wrote, describing the “enthusiasm” his friend took to his new job this year.

The disaster prompted an unusually swift public reaction from Xi, who said he was “shocked” and called for “absolute safety” in air travel.

State media said Vice Premier Liu He, a powerful official close to Xi who usually deals with economic matters, had been dispatched to the area to oversee rescue and investigation work.

The US National Transportation Safety Board said it had named a senior investigator as a representative to the probe, and that officials from Boeing, General Electric and the Federal Aviation Administration would be technical advisers.

Flight tracking website FlightRadar24 showed the plane sharply dropped from an altitude of 29,100 feet to 7,850 feet in just over a minute.

After a brief upswing, it plunged to 3,225 feet, the tracker said. Jean-Paul Troadec, former director of France’s Bureau of Inquiry and Analysis for Civil Aviation Safety, told AFP it was “far too early” to draw conclusions, but said the FlightRadar data pattern was “very unusual”.

China had enjoyed an enviable air safety record in recent years, despite a huge boom in travel.

Chinese media reported that the airline will now ground all the 737-800 jets. The deadliest Chinese commercial flight accident was a China Northwest Airlines crash in 1994 that killed all 160 on-board.