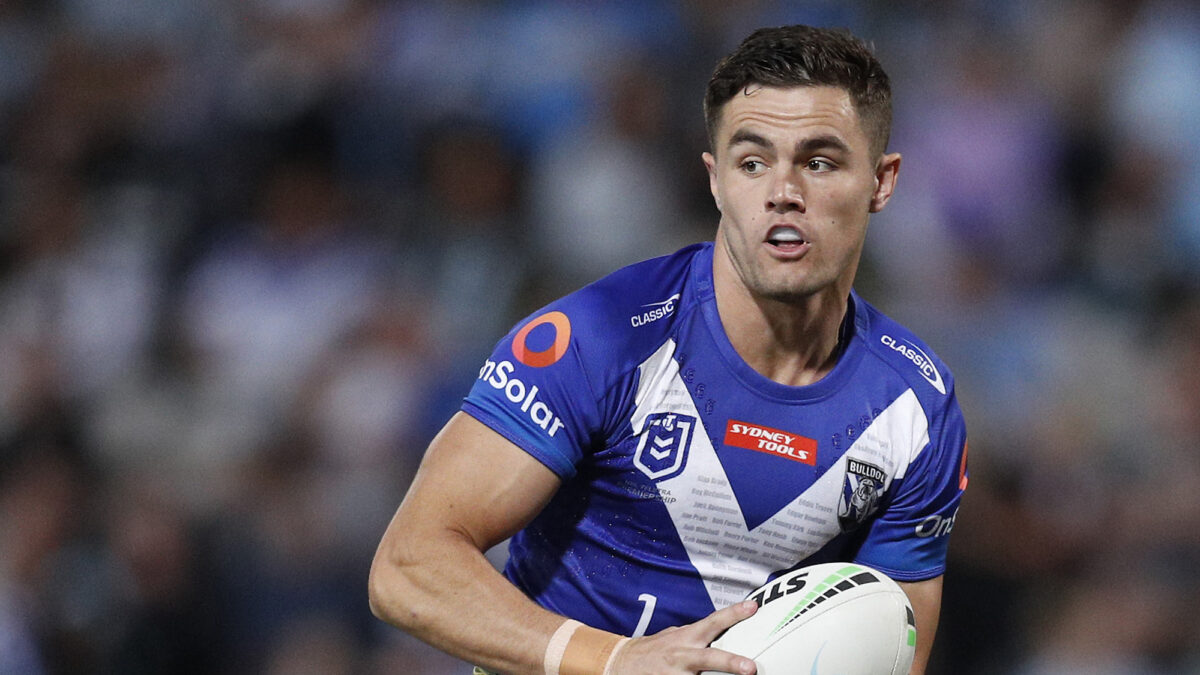 For all their recent list of high-profile purchases, the big question still lingers at Canterbury about who’s going to steer their new-look ship.

The Bulldogs have made a massive splash in the past few months bringing in new faces for the upcoming season and the next one, prompting many NRL observers to believe they can not only end their five-year finals drought but start competing again for what would be their first trophy since 2004.

Canterbury have also consolidated their 2023 roster with the addition of Panthers second-rower Viliame Kikau and Bulldogs hooker Reed Mahoney.

But for all the signings, the No.7 jersey still has a question mark hovering over who will be its long-term occupant.

Burton is a possibility but seems to have the body type and game style that suits the five-eighth role – when Nathan Cleary was unavailable for Penrith last season, Burton was shifted from centre to the No.6 jersey with regular pivot Jarome Luai preferred as the chief playmaker.

That leaves Jake Averillo, Kyle Flanagan and Brandon Wakeham to fight it out to be Canterbury’s first-choice halfback in 2022.

Averillo came into the top grade as a centre but played almost exclusively in the halves last season and is likely to get first crack at Burton’s scrum-base partner.

He does not necessarily look like an organising style of playmaker so he and Burton could be too similar to work as an effective duo.

Flanagan’s career has gone haywire – after coming into the NRL at the Sharks touted as a star of the future, his switch to the Roosters ended abruptly after an up-and-down season.

He struggled at the Dogs last year, particularly on last-tackle options in attack, and with two seasons left on his lucrative deal, it’s too early to give up on Flanagan living up to his undoubted potential.

If he gets an extended run alongside a classy halves partner in Burton and with a much-improved pack getting the team on the front foot, he can re-establish himself if he can convert good-ball sets into points.

Wakeham has had a few chances to cement a starting spot but has never managed to hold onto it and his best hope of seeing game time is probably as a utility option on the bench as he could also cover hooker.

After collecting the wooden spoon last season, Canterbury should be nowhere near the bottom of the ladder in 2022.

Forward depth hasn’t been a problem in their recent lean years but potency in the pack has held them back.

Pangai and Paul Vaughan should give them a lot more punch through the middle which can allow captain Josh Jackson to go back to what he does best – tackling like a trojan and hoovering up all the dirty work, rather than be relied upon to try to create attacking chances.

The jury is still out on English import Luke Thompson, who has only appeared in 25 of the 36 rounds since he arrived midway through 2020, mainly due to a string of suspensions for reckless play.

His fellow firebrand forward Jack Hetherington also faces similar problems due to his woeful judiciary record – if either player puts a foot, or swinging arm, out of line, they’ll be facing a lengthy ban.

And 2022 is also a mammoth year for coach Trent Barrett in the second year of a three-season deal. After walking out on his Manly deal due to his unhappiness about resourcing at the club, he now has a decent roster and plenty of support off the field to get the Bulldogs back up with the big dogs of the competition.

His predecessor, Dean Pay, was given a similar timeframe to turn the club’s fortunes around and much worse personnel.

Barrett clearly can coach, as evidenced by his efforts in getting Penrith’s attack firing on all cylinders, but if the Bulldogs continue to struggle and his tenure there ends on a sour note, a third chance at the helm in the NRL might not be so easy to come by.

Up front, Tevita Pangai jnr and Paul Vaughan will beef up a pack that has lost Adam Elliott, Dylan Napa and Ofahiki Ogden.

Star on the rise

The Dogs have quickly morphed into a veteran team with only Matt Burton and Jake Averillo in their likely starting team in the rising star category. Burton was on the fringe of NSW selection during Penrith’s premiership run last year and whether he can translate that form back to the halves after playing out of position at centre, will go a lon way to determining Canterbury’s 2022 ladder position.

Who’s under the pump

Luke Thompson was heralded as a significant signing a couple of years ago but the English forward has not been impressive enough for Canterbury to not entertain offers for him to play elsewhere. Add in frequent suspensions and it’s a long-term contract they would probably knock back if given a mulligan.

If all their new players strike up combinations quickly and the spine can finally become settled, this team on paper can challenge for a top-eight spot. After four straight years among the also-rans, Dogs fans will just be happy to move out of the cellar.

Jack Hetherington, Tevita Pangai jnr and Luke Thompson need to avoid their regular judiciary dramas or the Dogs will again be shuffling their squad around on a weekly basis. It’s not easy to get instant success with so many new parts from different clubs on the same page so Trent Barrett will have his work cut out meshing his various recruits with his squad to form a functioning team.