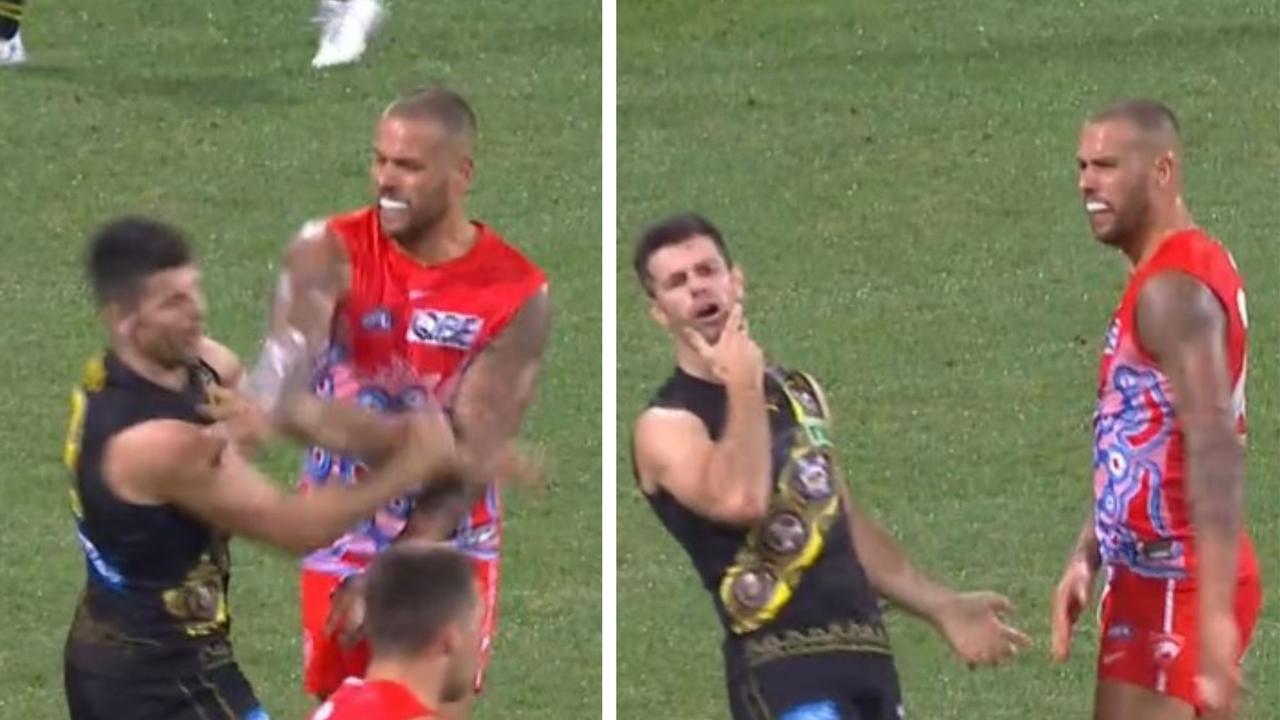 The AFL has handed Swans star Buddy Franklin a one week ban with an early plea after it was divided over an ugly incident against the Tigers.

An early plea would see Franklin miss the match against the Melbourne Demons next Saturday night after his contact was deemed Intentional Conduct, Low Impact and High Contact.

The incident left the commentary booths divided after an ugly incident in the shadow of halftime against the Richmond Tigers.

The Tigers had booted four straight goals to snatch the lead in the second quarter at the SCG but despite the Swans stopping the bleeding, the Tigers were heading for a commanding halftime lead.

After a shoulder and jostle from Cotchin, Franklin pushed once before a second push was slightly obstructed from the cameras.

But the Tigers star reeled out of the hit, which looked like a strike across the chin.

On Fox Footy, Jon Ralph said it was “a huge incident”.

“It’s clearly an intentional strike of some nature, it’s clearly high, but the issue with both angles is how much force is there and we don’t really see.

“We need the Zapruder files because we don’t see what the contact is.”

Nathan Buckley quipped: “No we just see the jaw pop out the other side.”

Ralph said the angles didn’t make it clear if he made contact with either strike and Brown agreed that they had to prove he made contract.

Buckley smiled and shook his head.

“Are you saying you don’t think there was contact?” Buckley asked.

Ralph responded: “I’m saying there looks like there was but we haven’t seen it.

“Toby Greene we saw the next day with a million different angles of the umpire contact, we saw that clear contact there. I think he’s in strife there but if you’re going to take it to the Tribunal you’d want to see the contact and we haven’t quite seen it yet.”

Garry Lyon added that Franklin might have been lucky that it was Cotchin on the end of strike as “I know a hell of a lot of players who would have gone down.”

Ralph said to Buckley that it looked like contact, to which AFL legend joked: “Either that or Trent should go to Hollywood. He’s done really well there.”

On Seven however, Daisy Pearce said Franklin should be allowed to play against the Demons.

“I think he was just going for a push on the chest and the second one slipped a bit high,” she said.

“They won’t like the look of it the AFL but slipped up high, open hand, barely brushed him and Cotchin played on fine.

“I think a fine at worst but they won’t like the look of it.”

James Brayshaw added: “It doesn’t look like it’ll be one of those that you’d lose matches for and of course the AFL always want Buddy playing and so they should. He might lose some money.”

However, there will always be a post-footy career open for Buddy if he wants it.